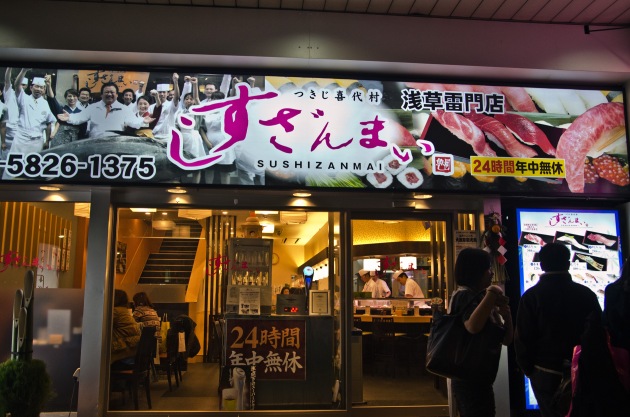 24-hour chain restaurants are deigned to be viewed with no less disdain as mass-produced pink slime.

Such places don’t seem to possess any redeeming factors. You don’t need intricate knowledge of the restaurant industry to know that the food will have been sitting limp and listless since morning, and that ‘freshness’ can – at best – only be something of a foreign concept, a level simply unattainable by chain standards.

But as with all things normally distributed, you will have the outliers, the daredevils, the reality-benders – those that are allotted the tiniest of probabilities of ever being good, but are. They exist, says statistics. 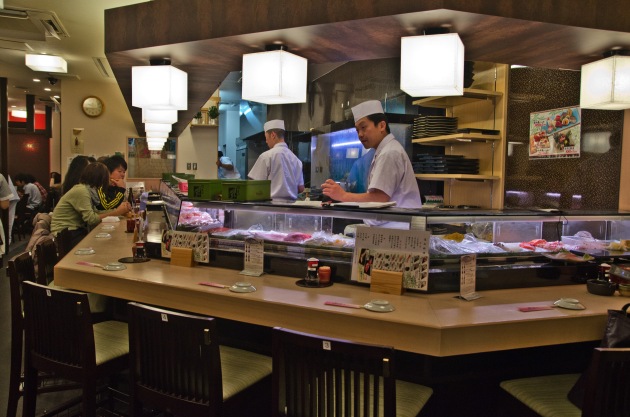 Sushi Zanmai is possibly the only 24-hour, 365-days a year sushi restaurant, with over 30 outlets scattered about.

The numbers alone inspire cynicism in me the likes of no other. But as luck would have it, I knew nothing of their business, only that its name sounded vaguely familiar, and that we were beside ourselves with hunger at 10pm, on the verge of withering in the bitter cold, and that the warm lights past the restaurant glass front was salvation.

Sushi Zanmai proved that there is hope in life, if only in Japan. This calls for rejoicing. 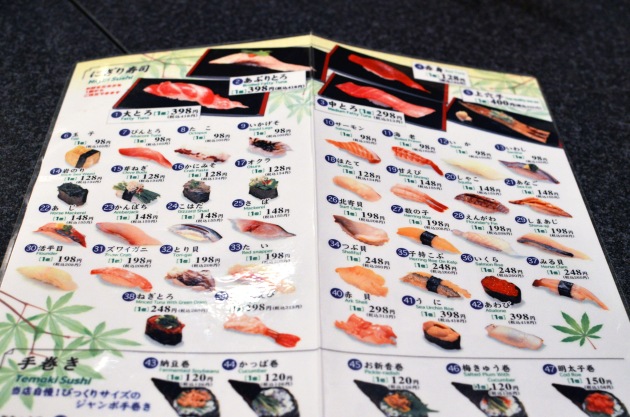 The menu has both Japanese and English, and although there is a kaleidoscope of unfamiliar fish, as long as you can read Pictures, you’ll be well on your way ordering up a massive amount of sushi. Don’t bother with portion control. Unless your idea of portion control is multiple orders of ten sushi at a time, then you have my green light. Other than the main menu, there is a set menu on the side entirely in – no not Pictures – Japanese, for sets that span a range up till ¥3,000. But figuring out what each set has to offer is only a matter of matching the words to the pictures on the main menu. Child’s play, I say. 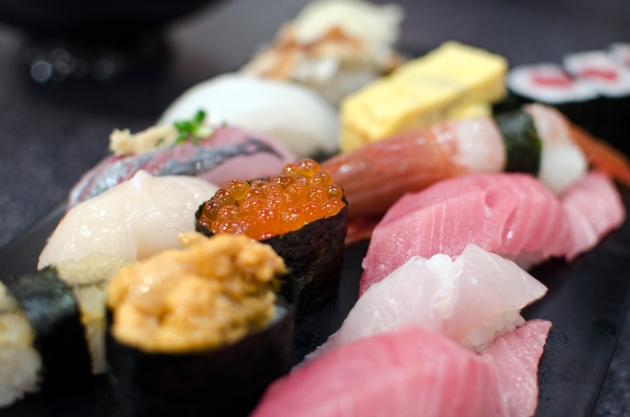 Sushi is not cheaper in Japan. Sorry to have to break it to you this way. Unlike how coffee in Italy, bread and cheese in France, dim sum and congee in Hong Kong are at least half the price and double the quality, dining in Japan is at a cost only slightly less expensive than Japanese restaurants here, but at an unbeatable quality. 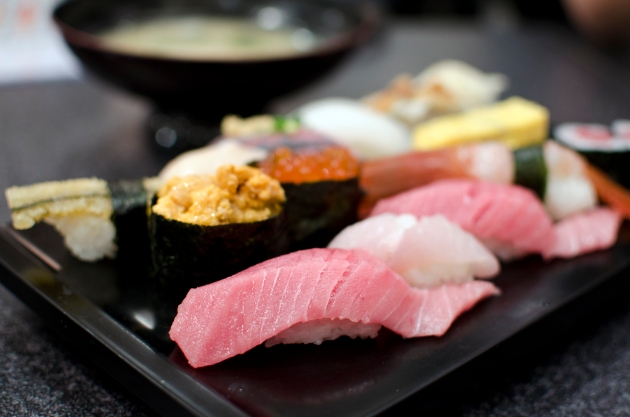 I had the ¥2,500 (around S$40) set of 12 nigiri that came with a bowl of miso soup. Every piece of nigiri, with the exception of the lacklustre sea urchin and rubbery herring roe, was beautifully draped atop the rice and fresh.

I’ve said it before and I’ll say it again: I have the sneaking suspicion that the waters around Japan have mystical properties, ancient mumbo jumbo happening below the surface, producing not merely fish, but creatures of the culinary Atlantis. It’s easy to forget that you’re eating seafood. 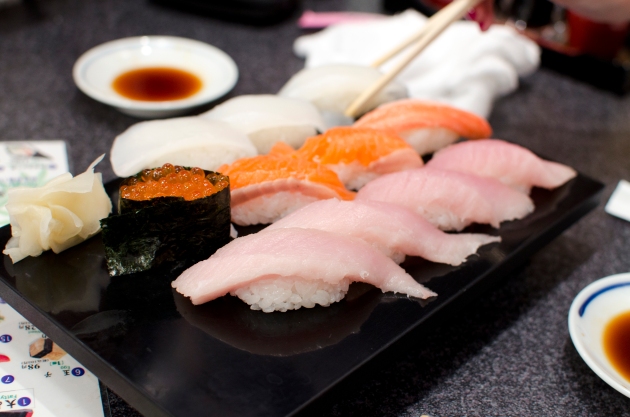 The girls got themselves heaps of maguro (tuna), shake (salmon), ika (squid), hamachi (yellowtail), and waved a waitress over for another round because, much to their own surprise, they absolutely adored the tuna. While clearly not from premium maguro (usually coloured a vibrant ruby), it tasted very clean.

So yes, while I will still keep my reservations on dubious-looking 24-hour chain restaurants, Sushi Zanmai has cleared my radar with an exceptional score. I should emphasize though, that its winning element lies in how much bang for your buck you get – at any time of the day. 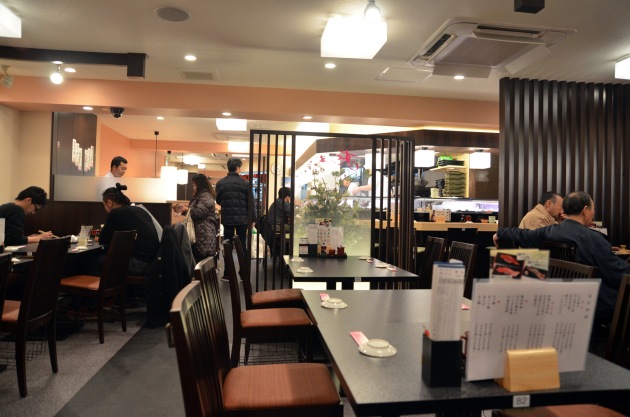 Although the original outlet is located at Tsukiji, the one we stumbled into was in Asakusa, where we were staying. It’s safe to assume that the Tsukiji outlet is trustworthy, but there are plenty of other outlets as listed on their website 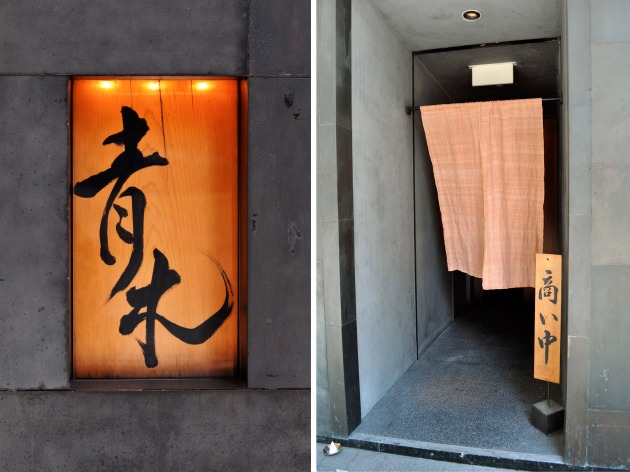 It’s a little difficult to wax lyrical about Aoki now for two reasons, the first being that this lunch was more than half a year ago, and the second being that it’ll only be about another week before I fly of to stuff my face proper with sashimi in Japan. But see, this post will never go up if it doesn’t right now, because I’m afraid Aoki will lose its charm, its Zen minimalism, its serenity, after I get back.

Aoki is under the Les Amis group of restaurants, but stands out in its austerity, and although it is situated in the row of the Les Amis Empire (as I like to call it) to the side of Shaw Centre, its easy to waltz by without a second glance, if you even gave it a glance to start with. I had to peek past the drapes, and ask if it was indeed Aoki, before proceeding into dark corridor and into its hushed interior, half expecting to be walloped over the head and taken to see the Yakuza. 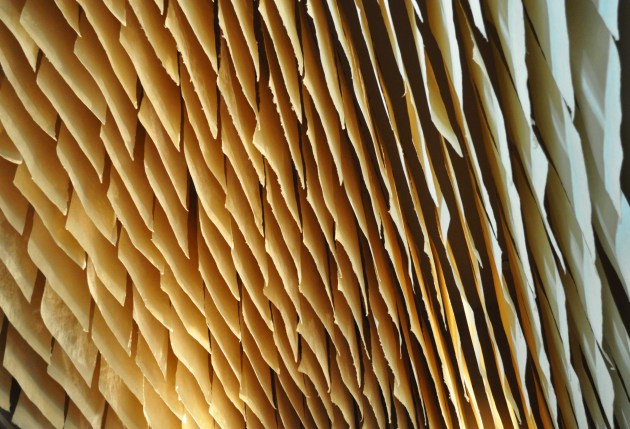 I didn’t dare snap pictures of the interior. And if you’ve been in Aoki, you’d understand why. The entire restaurant seats no more than perhaps 28 people, with private rooms hidden out of sight, I’m sure. All you’ll see are three or four partitioned tables, and then the sushi counter down a short flight of steps. It’s so small that any new arrival warrants everyone’s attention. I wasn’t about to whip my camera out anytime soon. 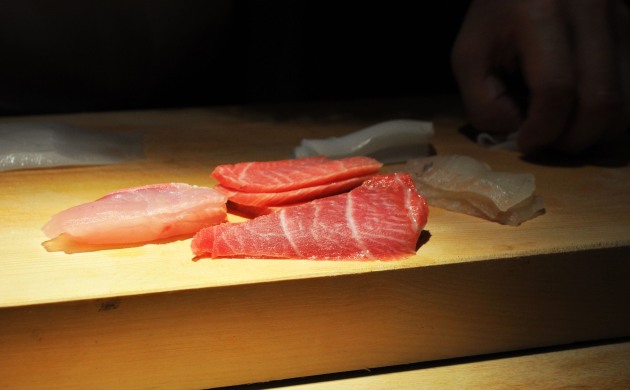 It’s minimal, furnished in lightwood, lit mostly by the bright ochre lighting atop the counter seats, and shrouded in a reverent sort of silence. Yet, the activity is a sight to behold – hushed, diligent, confident, and directed, from wait staff and Sushi chefs alike. It’s another world, where time slows down, where you sit back and let people take care of you, and where you’ll notice thin rice cloths hanging from the ceiling, swaying lightly in gentle drafts. 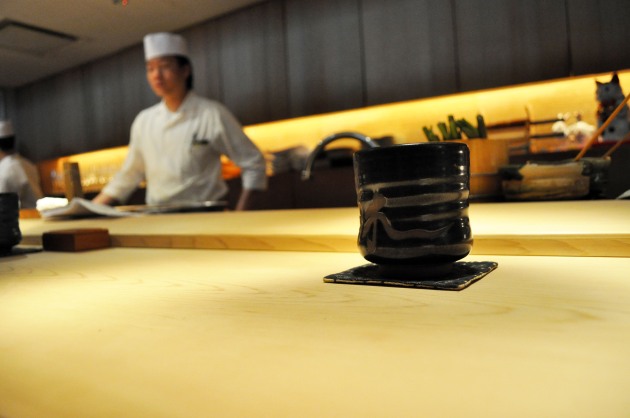 I made reservations a few days in advance for lunch, where their lunch sets go for $35++ in contrast to their dinners that rocket past $100. I’d advise that you do, for the counter seats especially, because these seats give a show more spectacular than a conveyor belt of listless-looking sushi. You see the chefs in action, blowtorches blazing, razor-sharp knives deftly slicing equally portioned slices of sashimi from slabs of fish, and the swift, almost effortless formation of sushi. It’s $35++ for amazing quality food, and meal-time entertainment. You don’t get that at many places.

END_OF_DOCUMENT_TOKEN_TO_BE_REPLACED 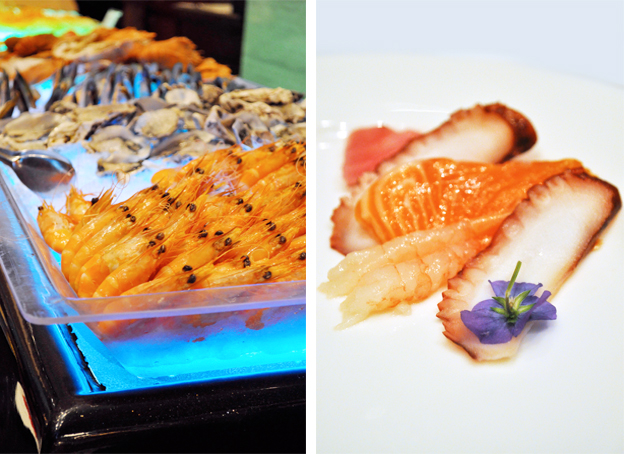 Buffets incite the same mixture of feelings within me as savage most-pit slam-dancing in front of the stage, so close you can see up the band’s noses – immense trepidation and morbid excitement.

It’s the kind where you can’t decide if you should refrain from joining in the party since being molecularly smashed against other people isn’t very appealing, or if you should dive right in since you already paid to enter.

What a star diver I used to be.

The staggering, inebriated shuffling out of restaurants after too much of, well, everything was even funny. It was hilarious! There’s no better way to deal with pain than to laugh it out (but then of course there were times when I couldn’t even laugh since my stomach took up all the space left for my lungs to expand).

Then I would just feel like an imbecile. I mean, is there any higher form of depravity than paying to be one chocolate-fondue-coated-banana-chunk away from going kablooey-kasplat?

Therefore I am pleased to announce that The Dining Room is my first buffet that no one has had to wheel me out on a gurney. No crutches, no rolling. I walked. Huzzah!

And every single buffet item was good.  END_OF_DOCUMENT_TOKEN_TO_BE_REPLACED