Buffets incite the same mixture of feelings within me as savage most-pit slam-dancing in front of the stage, so close you can see up the band’s noses – immense trepidation and morbid excitement.

It’s the kind where you can’t decide if you should refrain from joining in the party since being molecularly smashed against other people isn’t very appealing, or if you should dive right in since you already paid to enter.

What a star diver I used to be.

The staggering, inebriated shuffling out of restaurants after too much of, well, everything was even funny. It was hilarious! There’s no better way to deal with pain than to laugh it out (but then of course there were times when I couldn’t even laugh since my stomach took up all the space left for my lungs to expand).

Then I would just feel like an imbecile. I mean, is there any higher form of depravity than paying to be one chocolate-fondue-coated-banana-chunk away from going kablooey-kasplat?

Therefore I am pleased to announce that The Dining Room is my first buffet that no one has had to wheel me out on a gurney. No crutches, no rolling. I walked. Huzzah!

And every single buffet item was good.

There was just something about a bright display of seafood that just made everything else seem shiny and pretty. You know that if they’re got their seafood nicely chilled and reclined on a bed of ice, you’re in good hands. And yes, the prawns, mussels, oysters, crayfish and sashimi were all glisteningly fresh and vibrant. The octopus was a little tricky though. I had just put a slice in my mouth and begun chewing when I noticed Gillian, my Events Director, frowning from the effort at something she was furiously gnawing away at for the past 5 minutes, and so I asked her what was wrong.

“Gill, you look angsty. What’s wrong?” I asked, thoughtfully chewing on my octopus.

She gave me an adorable pout before replying, “You’ll feel it in another minute.”

And I did. The slow freezing up of my jaw from all the chomping away at something that didn’t seem to want to be digested.

Other than that, the sashimi was fantastic. I loved the ebi, the tiny prawns so sweet and soft they melt in your mouth. These ebi aren’t commonly part of the usual sashimi spread at buffets so I relished them. 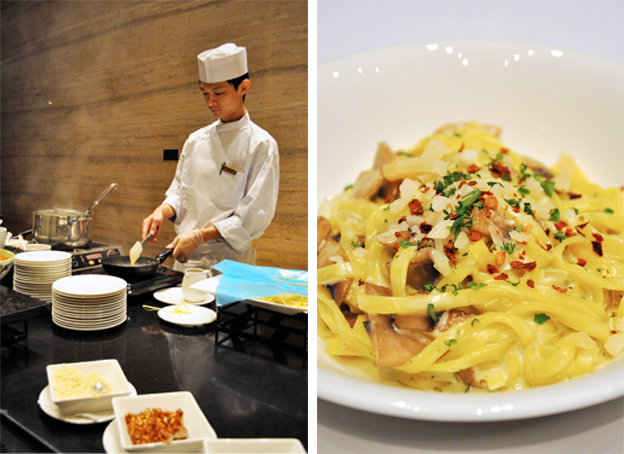 I am a sucker for freshly carved roast beef. I like to see the knife slicing through blushing pink meat, and even though I like my beef a level rarer than this (freaky, I know) just watching the chef carve out even slices was satisfying enough. The whole grain mustard and black pepper sauce were superb.

Then of course there was the pasta station, that I just had to order something from even though I now strictly avoid carbohydrates during buffets since that’s what totals you first before you even reach the desserts. The chef prepares everything in front of you, from rolling out sheets of pasta from a pasta machine, to slicing, blanching and sautéeing with your choice of sauce. It looked extravagant, and it made me feel like a kid watching and hovering around the counter so much I think I creeped the chef out. 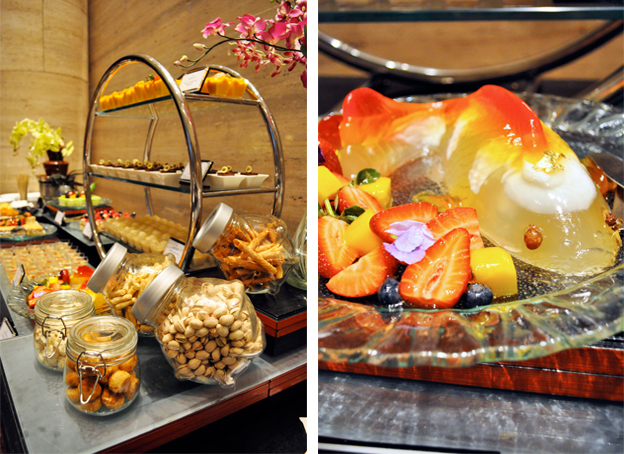 My eyes need to be visually pleased before anything else, and everything on the dessert counter was simply too beautiful and elegant it was almost stunning. Maybe it’s because I haven’t been to a buffet in a while, or maybe I just like my desserts, or maybe both.

I didn’t touch the chocolate fondue. Now, before you gasp and hurl all sorts of ‘How could you!’s and ‘You did what?!’s, let me explain. There were too many to choose from, and between picking 3 servings of the Chocolate Crunchy Praline Cake and chocolate fondue, I chose the cake. And I didn’t take a picture of it. How very clever. But it was perfect. As perfect a cake can get in my books, you know, with a crunchy layer and bitter-sweet silky chocolate layers…sigh…

Then there were waffles. And again, they have a counter with an ever-ready chef to dish out just-pressed (technically it is a pressing action, the waffle-maker I mean) waffles for you to drench in any permutation of condiments, sauces, syrups and macerated fruits all lined up in a neat row awaiting you. Please don’t bother with aesthetics as I did. Go crazy. The waffles aren’t your fluffy Gélare sort, so while I thought they were passable, I just doubled back to grab more cake instead.

It’s there! The second shelf of the circular, metal cake structure thingamimmy! The Chocolate Crunchy Praline Cake! If you like Rive Gauche’s Guanaja, then you’ll love this one. It’s similar. It can’t beat Canelé’s Le Royal though.

The whopping 40 of us effectively took root in the central dining area, and we were a rowdy bunch, gushing over fried dumplings, rich braised lamb, roast duck, durian pengat (which was awesome by the way. Bitter, sweet, creamy and will knock you out flat after one serving), chocolate pudding with pistachio sauce, ice cream and Chocolate Crunchy Praline Cake. Actually I was doing most of the gushing for the last one, and I’m usually not a gusher.

And of course I must thank my lovely darlings for organising the dinner event and being such priceless company, for holding me back from serving #2 of the durian pengat and reminding me that they’ll leave me to ferment in my chair if they can’t move me in the aftermath. And to dear Steph for sharing my platefuls of food and being such a sporting P despite still not trying a single slice of sashimi because it’s raw. 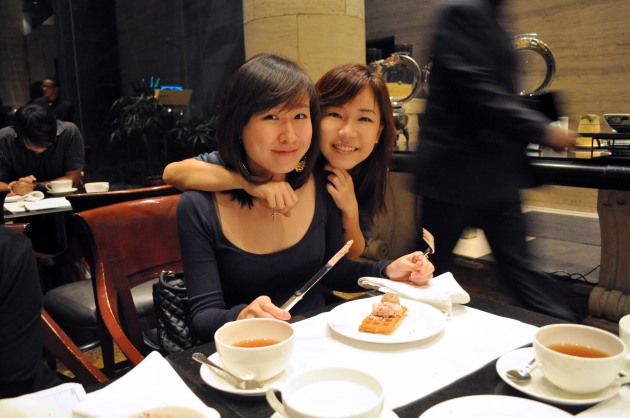 The Dining Room was, all in all, many more hits than misses with its international fair. I think it’s amazing how the quality of food remains of a good standard and that the service was impeccable. I never once returned to the table to my dirty plate of remnants. They sell their cakes too, at a counter just outside the dining area! I might just get one next time round because their desserts are win.

They have a warm, classy ambience, which I imagine would be perfect for Sunday brunch. Now that’s an idea.