This probably needs no further elaboration from me. Even if it does, a quick Google search should suffice. I’m lazy, and weaving together repeated bits of information into a paragraph free from plagiarism is utterly banal.

I just want to get right in to the meat of things, right here, right now. Chop chop. It’s like I’ve got a ticking-time bomb counting down the seconds before I self-implode or start gnawing at my keyboard in desperation for a Shack Burger. I need to get this out of the way because just the memory of the taste of the beef patty can induce seizures and hallucinations in me.

Gourmet burgers need to get out of the way, for the same reason that souped-up hawker food and deconstructed table staples need to stop since the simple things done right will always, always take the limelight. I’m not carelessly waving aside the time and effort it takes to craft a molecularly-gastronomic xiao long bao (there is much to be respected and admired in such endeavours), but all I’m saying is when I want a burger, I want a burger in the truest sense of the word – beefy, cheesy, unctuous, eyes-rolling-to-the-back-of-your-head-till-you-see-your-brain good.

My first encounter with a Shake Shack burger was the Shack Stack ($8.85USD) – a burger with a single beef patty, a battered and deep-fried portobello mushroom stuffed with melty cheese, a couple of slices of juicy tomatoes, and crisp lettuce. This was after waiting in line for 15 minutes and waiting 10 minutes for a table. Shake Shack is popular, and with good reason. I shared the burger with a friend, and if there was one lesson that I learnt, it was that I was going to get a double burger with the works, fries and all to myself the next time round. And those Yukon crinkle-cut fries were confoundingly crisp, fluffy, yet slightly springy. I don’t even eat fries, but these were criminal.

Behold, the Double Smoke Shack ($8.80USD), a double-beef-patty wonder with melted American cheese, Niman Ranch all-natural applewood smoked bacon, chopped cherry pepper, and Shack Sauce. See, when I make promises to myself, I keep them. Under other circumstances, I’m probably not as resolute.

So here’s why Shake Shack burgers are maddeningly good: it’s all in the beef. For the nutrition diehards, this is 100% all-Angus beef, with no hormones or antibiotics. To be honest, that doesn’t explain its taste, but to some people, that description gives the burger a little extra shine. I’m usually particular about details like that, but now I’m just concerned with the fact that, without a doubt, the beef was grain-fed (that could only explain its richness), freshly ground, moist, chunky, pink, and griddled till crisp on the outside. I’ve heard things from friends about there being bits of liver in the patties, therefore explaining its superior beefy taste, but I haven’t found any information on that. If Shake Shack had the option of just ordering beef patties, I’d do just that, because words cannot completely describe how good they are.

Then there’s the potato bun, vibrantly yellow and softer than brioche. It’s the perfect vessel for drinking up all the delicious beef fat that trickles out of the patties. Things still get messy anyway, so grab a handful of serviettes just in case.

I’m also tiring of spamming adjectives at this point, so if you’re ever at Shake Shack, just order this sterling burger combination. Truth be told, I’m just getting hungry now, and I want to get away from the laptop. The glistening cheesy patties are driving my digestive enzymes crazy.

According to friends, the milk shakes are fantastic. Don’t listen to me, because I’d never order a milkshake in this lifetime, or in any other. I’d rather drink melted ice cream.

As a general rule (both for myself and for anyone reading), if an establishment manages to get me to return more than once, it’s got my golden stamp of approval. I had Shake Shack three times, because if I’m ever going to eat fast food, I’m only going for the best and will go all out.

So if you’re ever in New York, or some of the other neighbouring states, you need to hit up Shake Shack. That’s an order, under oath of reading this post.

I need to clean up the drool now.

Locations and Menu can be found at www.shakeshack.com

I’ve been having something of a writer’s block lately. It’s crippling. There’s nothing worse than a backlog of posts and pictures to share of what I’ve been gorging myself with the past couple of weeks to remind me just how bad things can get when my muse runs out the door. But nevermind that, because here’s what I gorged myself with for lunch on Tuesday. 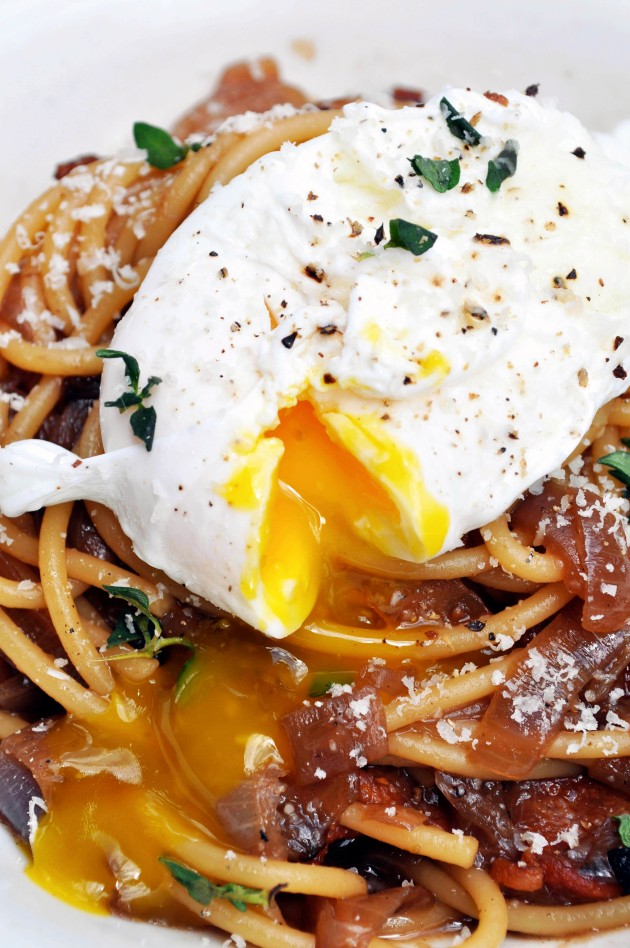 Old as it may sound, the fancy meals I sometimes (ahem..rarely) whip up are because there’s some kind of complaint in the household. I don’t cook for myself, in fact, you don’t want to know the kinds of things I eat if I’m left to fend for myself for a meal. So it’s only when there’s some potential disharmony brewing under the roof, you know, things like “Why are we having boring steamed chicken again?”, “Can have some else or not ahhhhhhh”, or perhaps “I want pasta but I don’t want this kind of pasta” (and one is supposed to practice some form of divination to figure out what pasta the brother wants, or better yet, what he doesn’t know he wants but will like) But no matter. If there’s anything that will always be a crowd pleaser, it’s the coupling of caramelized onions and crisp bacon. ‘Nuf said.  END_OF_DOCUMENT_TOKEN_TO_BE_REPLACED

2 Comments Posted by Christine on December 3, 2010 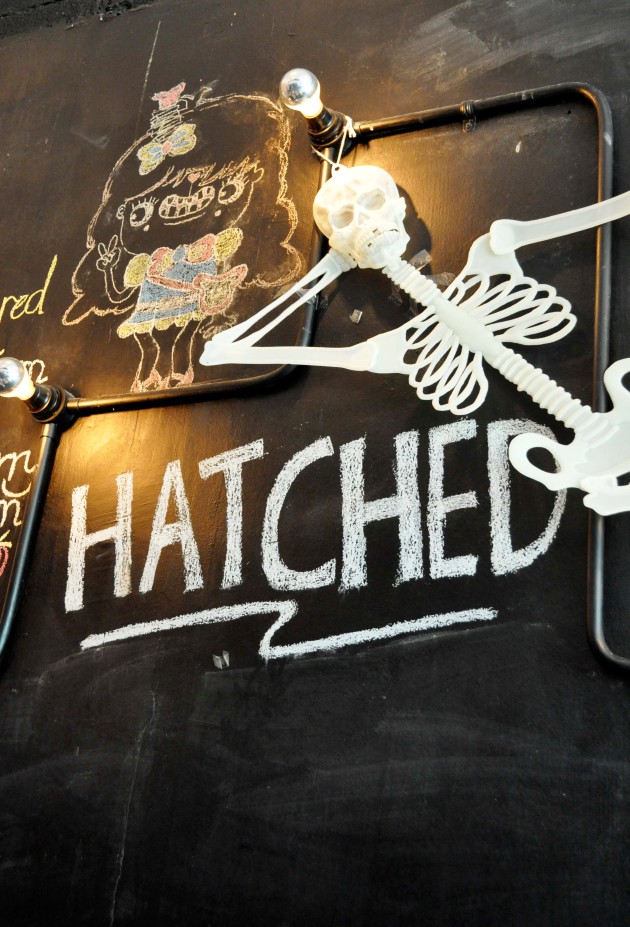 I do plenty of silly things now and then, and lately, I’ve run out of excuses for the mindless things I’ve done.  It’s like there’s some missing link between my thought processes that my brain just skips without realising.

I have no excuse for dining at an egg-inspired all-breakfast place and not ordering anything to do with eggs.

Really. Don’t bother waiting for my explanation because I have none.

I wasn’t thinking. (Haven’t been doing that for a while, and…wait, is that considered an excuse? Shrugs.)

So I returned to Hatched to redeem myself. END_OF_DOCUMENT_TOKEN_TO_BE_REPLACED 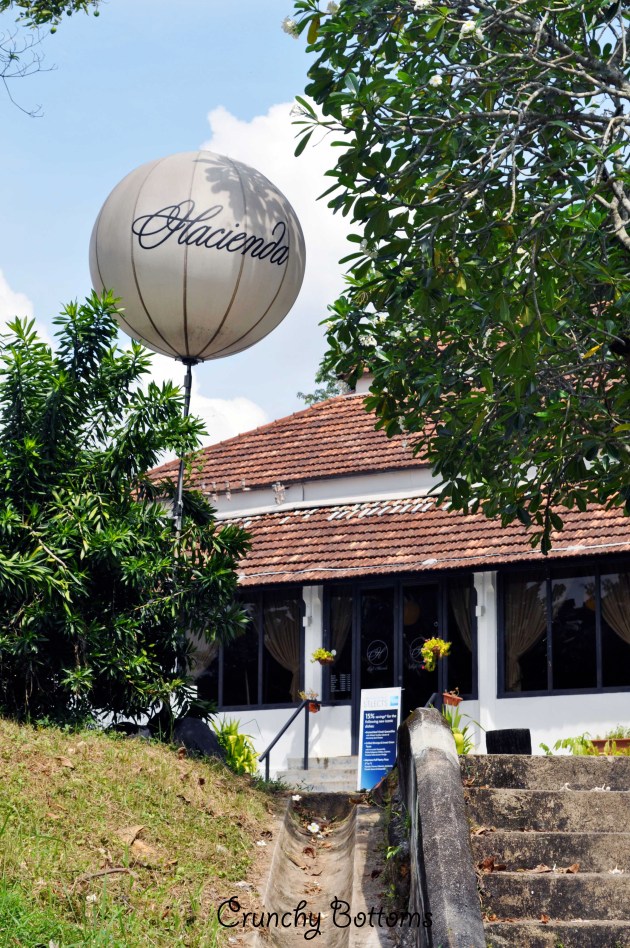 In a direct one-eighty to the Choupinette post I put up a while back, I’m embarrassed (well, a little) to admit that yes, I’ve been brunch-ing far more frequently than I would normally and that I will now openly declare that I’m brunching as opposed to just having a late breakfast. It sends a chill up my spine that I realise that I don’t think I can return to that normalcy. I’m afraid, very afraid.

The thrill of finding an awesome brunch place now supercedes the steady thinning of my wallet.

See, the novelty of doing something unconventional (like having brunch dishes at 4pm, brunch-ing on a weekday before class, playing with Google Man to find brunch places..) will never wear out as long as this idea of brunch is still shiny and new to me.

And as long as I keep chancing across gems like Cafe Hacienda, nestled in the lush foliage of Dempsey Hill, all peaceful and warm and blissful and cozy and empty during weekdays and with killer Eggs Benedict… 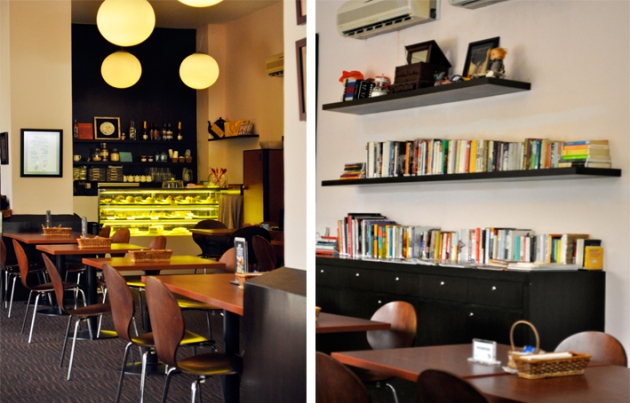 All-day breakfast and brunch places are sprouting up all over the island, and while Café Hacienda’s brunch and breakfast spread of waffles, egg dishes and pastries aren’t going to win an award for variety, it is much appreciated and admirable that they make up for the lack by executing the few that they have to offer fantastically. Now that’s reliability – doing one thing right and well each time without fail, namely, their Eggs Benedict.  END_OF_DOCUMENT_TOKEN_TO_BE_REPLACED 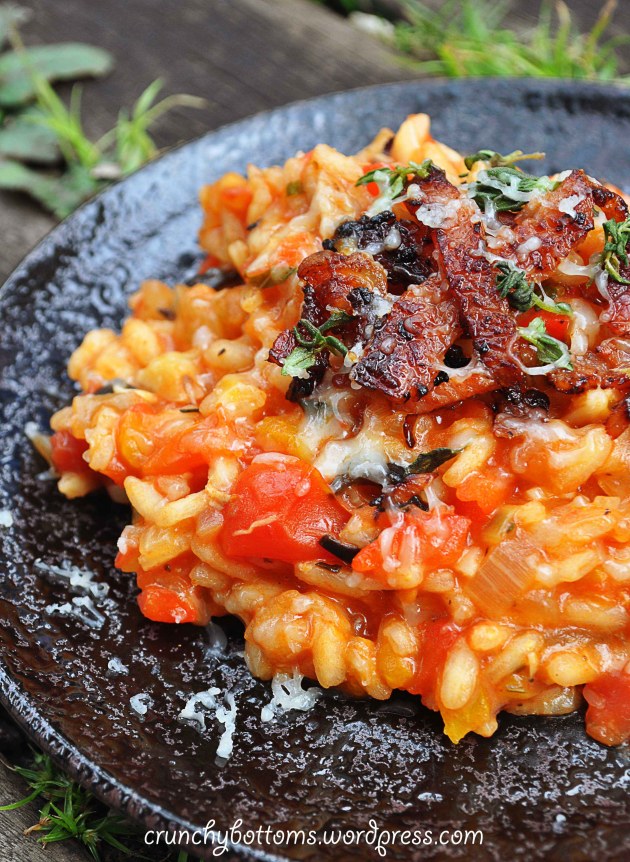 I have never had authentic Italian risotto.

There, I’ve gone and said it.

I have this staunch principle, where I will not  – even at gunpoint – recreate something that I’ve never tasted before, because I have no idea what the standard or benchmark is, so I’ll never know if what I’ve concocted is authentic, bona fide, genuinely true to the dish’s traditional taste and texture. Like how I’ve sworn not to bake macarons till I’ve had one. And I have. But I still won’t make those little baking devils because I’ve never had one made from Pierre Herme’s shop in Paris because those are the macarons to have in one’s lifetime.

I don’t feel qualified somehow, as though I’m some deluded housewife (which I am not and will never be, so call me one and I will end you) desperate to experience some form of life outside of the four walls of the home she’s bound to, even if that means cooking up some pseudo curry from a recipe that the neighbour’s German wife swears by just for a flickering glimpse of what India is like beyond her seat beside the baby’s rocking cradle.

Oh my, don’t I feel all poetic now.  END_OF_DOCUMENT_TOKEN_TO_BE_REPLACED

The first thing that struck me when I surveyed the restaurant after sitting down on one of its canteen-like benches was the sheer irony of its name.

See, I’d expected patrons to be eating with their hands, regardless of this being a gourmet burger joint or not because in my opinion, by integrity of the act of eating burgers alone, one is expected to exercise the use of hands at some point. So the pun in its name really has no more of a purpose other than to draw out the bizarre incongruity between it and the actual dining experience.

Because no one was using their hands at all. Not a person in sight.

But your initial bewilderment will soon dissolve into a sort of amused enlightenment, an ‘Aha!’ moment, as Oprah would say, because the burgers bear as little resemblance to actual burgers as opposed to mini replicas of leaning towers of Pisas…which I found absolutely adorable.

I find paradoxes, oxymorons and juxtapositions adorable. They tickle me.

So it shouldn’t surprise anyone then, that I just had to order the tallest, most ambitious of them all. END_OF_DOCUMENT_TOKEN_TO_BE_REPLACED 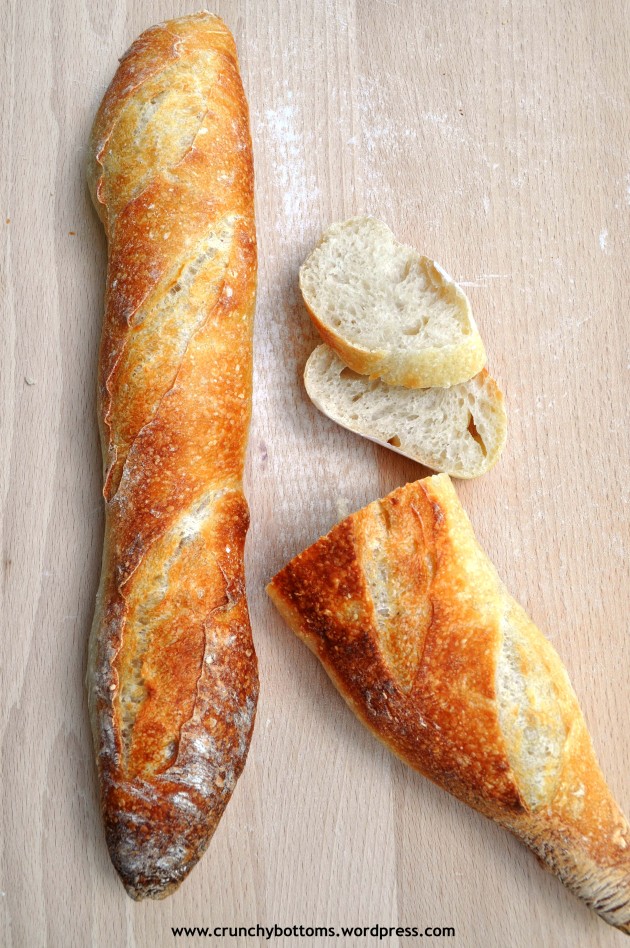 I started this on Saturday, and popped it in the oven today. Richard Bertinet wasn’t kidding when he said that longer fermentations and rising times produce a gorgeous rusty-red crust, full-bodied flavour and the slightest nutty sweetness. Oh my lordie. I could have an entire loaf as a snack, or perhaps all three. I hadn’t planned on taking a span of 3 days to bake this, but I’m glad I did. Now I only wished I had doubled the batch. Half of it’s gone already.

And of course my shaping leaves much to be desired. They’re suppose to look like baguettes but ended up mangled. Tsk.

That wasn’t all that I made with the dough though (say that ten times fast!). I could jump around the house in joy, bouncing off the walls like a chimpanzee on crack and red bull both at once because I thought three baguettes would satisfy the family enough, so I took the last ball of dough and made this: END_OF_DOCUMENT_TOKEN_TO_BE_REPLACED

I seem to be having pizza every week now. Which isn’t a bad thing by any means, of course.

For a self-proclaimed bread fanatic, this is pretty much a given. As long as something required yeast in the making, I’ll be all over it like a plague of locusts that would put Moses’ to shame.

Alright, so that wasn’t the most flattering of similes. But really, if you don’t like pizza, well…who are you?!

So tell me you could skip merrily by a restaurant signboard, boasting a not-so-modest chalked scrawl of ‘1-for-1 Pizza’ and I’ll instantly drop all previous allegations. I promise.

I’m talking about a restaurant from the Garibaldi group of restaurants (aka Italian Food Done The Proper, Respectable Way). I’d pick this over Canadian 1-for-1.