I’ve been talking about dragging Gushi to an outlet ever since my first bite of cracker-thin Skinny Pizza at Wheelock Place. Today I did. Lugging 4kg of assessment books and textbooks from Novena to City Hall and through Citylink to Suntec City, (because poor students like us have to make peanuts from selling used books at second-hand book stores and stingingon transport fares) I met up with her during her lunch break.

This is my third time having a Skinny Pizza, the last two having been at Wheelock and Dempsey, and this was Gushi’s first. Needless to say, she was tingly with excitement, as so … 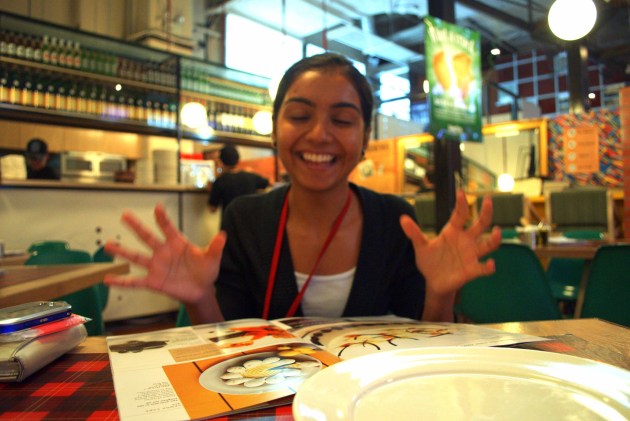 This is what happens when people don't listen to me.

I had very kindly advised her against scanning the dessert menu (yes they made it a point to make a separate menu with IN-YOUR-FACE pictures). Yet we are all gluttons for punishment, no?

We ordered the Macadamia Roasted Pumpkin skinny pizza, a whopping 18 inches of vivid roasted butternut pumpkin sprinkled with crushed macadamia nuts, savoury French goat’s cheese and ripped basil. The first time I had Skinny Pizza, it blew my socks off with it’s brittle crust and perfect combination of toppings. This was yet another winning combination, and one simply cannot accuse them for the less than desirable amount of topping because the crust would never be able to withstand the weight, and as long as there’s arugula, I’m one happy patron. If you ask me to compare to Borgata’s pizza though, I’ll be frank and say that the novelty of having a poppadum as a pizza base wore thin (no pun intended) quickly. I’ll have to side the many reviews I have had the chance to read about Skinny Pizza when they rile against the flimsy crust, and I’m not exaggerating when I warn about the explosion of deadly shrapnel of pizza base when one attempts to delicately spear a piece (i.e this is epic fail for a first date).

Instead of ordering soups this time, we decided on the truffle fries, which disappointingly looked like Macdonald’s fries with the additional white truffle oil. It’s one of those dishes which you either love or loathe at the first nibble. I’d be lying through my stomach teeth if I ever claimed to fall into the first category. I don’t order fries often, if not at all due to my choice of lifestyle, because I have never been truly impressed by any, with the exception of those accompanied by that fantastic curry sauce at Queen & the Mangosteen.

One gripe that I had (going off on a randon tangent here, did you know there’s such a thing as Gripe Water? It’s not a typo.), was that they didn’t have extra virgin olive oil to dribble onto my pizza slices. What they did have however, was olive oil, and a premium one too. Judging by it’s greenish hue, there was nothing doubtful about that. It only mildy shocked me that the waiter and the restaurant establishment had no clue as to the types of olive oils to be displayed on the table tops alongside the salt and pepper shakers.

Extra virgin olive oil is best consumed drizzled atop salads, paired up with balsamic vineger as a bread dip and, ideally, used liberally over pizzas because heat would compromise its superb nutty flavour. Olive oil, however, is almost scentless and would be more suited for cooking because of it’s higher smoking point. I should make a separate post on this because I feel that oils are one of the most important aspects of food preparation and consumption that most Singaporeans unfortunately gloss over. I’ll leave that for another time. 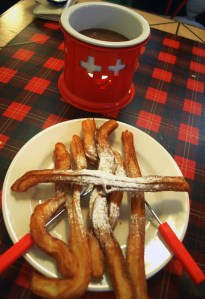 Now, I wasn’t intending on ordering dessert because I am a firm believer of eating till 80% full. Then again, I also believe in the perfect meal, or at least as close to one as possible. How I’ll ever reconcile those two principles of mine I’ll never know. I won’t even try. We had what was called the ‘Spanish Donuts’, which in my opinion, were pseudo churros and tasted as such. They looked like churros, they came with chocolate sauce as churros do, and they were not chewy in the least as churros should be. Perhaps it is precisely for this reason that they named it ‘Spanish Donuts’. I found the twang of coconut in the chocolate sauce rather a hit and miss, probably because the sauce was too sweet for my liking and because I spent most of my dessert time fishing out pieces of donut that snapped off because they were that crispy. Maybe it’s a thing, a theme of sorts that everything in the restaurant has to be crusty (shrugs). If I ever want a churro fix, I’ll be heading back to Serenity at Vivocity.